FCR, the premier provider of outsourced live agent call center and business process solutions, announced today that it has once again made the Inc. 5000 list for the fastest growing private companies in America for the third consecutive year. 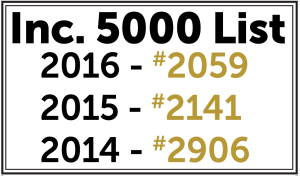 FCR was ranked at 2,059, moving up 82 ranking positions from last year when the company was ranked at 2,141. The list is ranked according to percentage of revenue growth over a four-year period. All companies in the Inc. 5000 list are based in the United States, privately held, and independent. To qualify each company’s revenue in the initial year must have been at least $200,000, and revenue in the most recent year must have been at least $2 million. FCR’s ranking was based on revenues of $48.7 million in 2015 with a 3-year growth of 181%.

“We are very proud to be included in the Inc. 5000 list for the third consecutive year,” said John Stadter, CEO and co-founder of FCR. He added, “We have continued to expand our company at a fast, but measured pace, adding a new center in Independence, Oregon, additional leadership in many of our sites, and even more colleagues than the previous year. We have even more growth planned for 2016 and beyond. All of the credit goes to the many colleagues who are working hard every day to make this company what it is – the most respected outsourcing company in the industry.”

“To be recognized by Inc. magazine and included in the Inc. 5000 list for the third year in a row is a great achievement,” said Matthew Achak, President and co-founder of FCR. “This award is a direct reflection of our amazing people who are working to change the face of the outsourcing industry – one phone call, e-mail, and chat at a time.” Achak added, “With all of the growth and expansion FCR has seen in the last year, one of the things that has kept us grounded is our focus on maintaining our core values and unique culture that makes us so appealing to our clients. We will continue that focus moving forward as it has been a key to our success.”

FCR, a TTEC company, is headquartered in Roseburg, Oregon, with domestic customer experience centers across the U.S. and international locations in Mexico, Poland, the Philippines, and India. FCR has built a new class of high-quality customer experience and business process outsourcing solutions for various industries and economic sectors. Founded in 2005, FCR (First Call Resolution, LLC) currently supports more than 80 clients and employs more than 3,000 colleagues across seven customer experience centers in the United States. FCR is changing the face of the CX industry, one call, email, instant message, text, and video conference at a time. To learn more about the company, visit www.gofcr.com for further information.